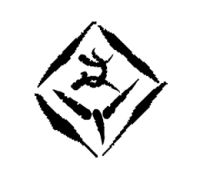 The Glyph of Pack Corvus, assembled from the Glyphs for "Pack," "Watch Over" and "Crow."

Their Story so Far:

Corvus is a Pack originally formed by the Cliaths Oog van de Wereld, Vuurproef and Diepste Dal as a young bloods pack shortly after they received their rites of passage and names from Rises Again. They decided to continue to learn and grow together, like they had as cubs before. As a pack, they lean heavily towards the Concordat of Stars and reflect its more pragmatic and progressive ideology in their conduct.

The explicit goal of Corvus is to be a Pack that provides and maintains an overview of the information that may become relevant in the near or distant future. It is a pack dedicated to trying to ascertain the "big picture" of potential and ongoing issues, to compensate for Garou's innate tendency to think short-term only. Their Totem, Torenkraai, a Crow spirit that always keeps a watchful eye over everything from its summit, embodies this goal.