From Bluepelt Wiki
Jump to: navigation, search
Chalice Stormbringer is a very dangerous enemy of the Bluepelt Sept who has conquered and wiped out both the Septs of the Veluwe (in Maart, 2006) and Groningen (in Mei, 2006 (2)). She has also slain the last King of the Dutch Garou Nation and most of his strong allies (in Mei, 2006 (1)). 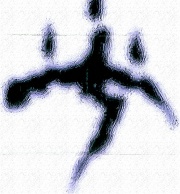 She first made herself known in December, 2005 to several Cubs that were lured from the Bawn into an abandoned Wyrm infested building. To them she spoke her challenge of war against the King and bit off an ear from all of them.When this challenge was ignored she abducted the Cubs once again in Februari, 2006 and used them to lure the Alpha of the Sept to her to have a talk of war. The three cubs that remained became her Chosen, the messengers that could go freely between the two war fronts.

In April, 2006 Chalice Stormbringer gave the Chosen a letter for the Alpha of the Sept to negotiate a treaty. This letter was as follows and also included Chalice's signature Glyph, which is the Garou glyph for Storm. 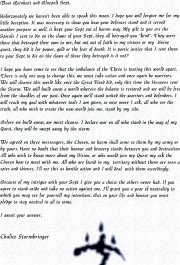 The letter as send by Chalice

Several attempts to react to this letter were made by both the Chosen and the Alpha, but due to unfortunate circumstances the last meeting with Chalice Stormbringer was in Augustus, 2006. The Bluepelt sept was given the choice to fight against her, to agree to a year of neutrality or to fight with her. Although the choice was hard and it was tempting to choose for Gaia and fight this vile enemy to the death, a year of neutrality was chosen.

She cleansed Pernis of the Black Spiral Dancers because they were stagnant and were simply not useful for her new future.

Chalice and her army have taken up residence in the conquered Cearn of the Veluwe and corrupted the Cearn spirit Thor to become a creature of the Wyrm.

The treaty of Neutrality was soon voilated in September, 2006 when two Black Spiral Dancers acting as messengers arrived at the Bawn and were slain by a group of Garou led by the Alpha himself.

Jozeph was challenged and the new Alpha of the Bluepelt Sept, Xavier, re-enforced the treaty with Chalice for another year. This treaty was soon voilated once again in Oktober, 2006 and the current relationship with Chalice is open war.

In November, 2006 the Bluepelt Sept was forced by Elders of all the tribes, who are located in Lion (France), to attack the Black Spiral Hive now in Groningen. In this battle the Black Spiral Dancers kidnapped Shannon de Boer, who is one of Chalice's Chosen. In the meanwhile she launched an attack on the Cearn of Delft after which Ferret, a Black Fury Metis Theurge, went out to save her, although there are rumours that he went for other reasons.

In December, 2006 Shannon was released by the Black Spiral Dancers that kidnapped her. It is unknown why she was released, but she was viciously abused and beaten in the month she was away. Ferret did not return and Steven "Defies the Storm" Bos went to France to get him out of there. He was killed and hung in the New Church in Delft. It is now obvious that her words about the Chosen were lies.

Ferret was later found to be turned to the Wyrm and slain for his corrupted acts. The kings united and send the Bluepelt sept into war, forcing them (again) to attack Groningen. This time, however, we won, slaying a number of high ranked Spirals, some of them part of Stormbringer's pack.

In september 2008, Maureen "Natural Exception" de Zwart announced to the sept she had discoverd the hidding place of Chalice Stormbringer. That same night, Stormbringer had Maureen executed for 'treason'.

Chalice Stormbringer claims origin from the White Howlers and Garou that have been in her presence describe her as being pure. Since she aligned herself with the Wyrm to reach her goals, she has an ever swelling army of Black Spiral Dancers at her disposal. This army only gets bigger as her fame spreads. Also, she seems to be connected to a huge Umbral Storm which absorbs Gaian Spirits. It is commonly assumed that the Storm is a representation of her power in the normal world. She claims her comming has long been prophecied, but it has become only recently known that the Theurge that made this Prophecy is still alive and a Black Spiral Dancer. Unlike what is common for the Black Spiral Dancers, the ones that follow Chalice believe in her words and the prophecy and do not follow her for personal power or out of fear.

Chalice Stormbringer is not just another agent of the Wyrm who has come to destroy the world and start the Apocalypse, although we think her horde of Black Spiral Dancers might believe she actually is the catalyst that will be the start of the Apocalypse (But we know it is not so since Granum has told us already that her comming was not mentioned in the Prophecy of the Phoenix).

She has a mission in this world and merely uses the Wyrm and the Black Spiral Dancers as tools to achieve her mission. She even admits her tools are broken, but they are sufficient to act out her role als avatar of the Wyrm. She sees a world in stasis, a world that is unbalanced and a world that is wrong. The only way to heal this world is to begin it anew, first cleansing the world with fire and blood and destroying all that is not worthy to exist in the new future. Then after the world is cleansed, the world will be rebuild and the Wyld, Weaver and Wyrm will be balanced again. She says that she acts as the avatar of the Wyrm in this task and that the avatars of the Wyld and the Weaver will stand up to serve her in this mission. These avatars will help her decide what can remain and what has served its purpose and has to be destroyed. Also, they will raise their own armies of Wyld and Weaver creatures to aid her.

We Garou, she claims, are also stagnant, caught in a web of rules that have outlived their purpose. We are backstabbing each other for power, our Elders are keeping the younger ones down and we are fighting amongst ourselves instead of being true to the purpose we are created for and fighting for a better world.

Her Storm is swelling and growing, and she controls the storm and guides it to cleanse the land. She has walked the Spiral and seen further. She even claims to talk to the Triat directly.